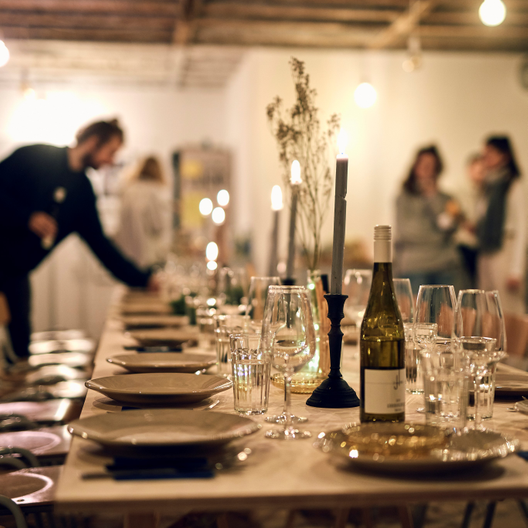 December was cold this year, and in an ongoing period of social distancing, people yearned for something both new and familiar at the same time. Luckily, they found this longed-for interpersonal closeness in what at first glance appeared to be a very inconspicuous space.  From week to week, people met in the space to eat together: neighbors, old friends, interested people, and those who came across this place as if by chance.  The Trafostation became a place of arrival, security, diversity and exchange.  Anyone who came as a stranger took home with them thoughts and impulses, and often new friendships and a renewed feeling of belonging.  From the outside, it almost seemed as if the room was glowing.

The many small, enlightening ideas that arose on long tables were not long in coming.  Important allies and communities were found for the Trafostation and the community beyond.  It became a place where energy could be transformed: into plans, into friendships and occasions, into to all sorts of things.  The people couldn't tell what exactly it was, the magic present in these evenings, but one thing was certain: they never went out the door with the same mindset with which they came.

Would you like to become a part of our story?
Then come to our community dinner, every week in the Trafostation on Tuesday evenings.
Beforehand, we will share our menu for the evening on Instagram.

You can find tickets here